Welcome to "Broadway Bound!" sponsored by Hambo Stamps! Today Hambo customers and the Bacon Bits Design Team are bringing you fun creations that depict Broadway show titles! It might be our favorite, or just one that was fun to design. If you arrived here from  Deborah you are in the right place! If not, you might want to start back at the beginning at the Hambo blog to make sure you are eligible for the hopper prize!A prize will be awarded to one participant whose Broadway-themed creation tickles the Bacon Bits’ fancy in a hammin’ jammin’ way!  Another prize will be awarded randomly to a hopper who comments on all of the blogs along the way. The winners will be announced on the Hambo company blog, Talk to the Ham, on Tuesday, September 25.We love comments anytime, but the deadline for prize entry comments is Sunday, September 23 at 5 PM CST. Don't miss it!Here's my creation... I had soooo much fun creating this!  I laughed the whole time and now I can't decide which friend I should send this little notebook to...hmmm I shall do some thinking.  And of course this could represent a ton of musicals...but a few that immediately popped in my head are: NunSense, The Singing Nun,  Sister Act, and while not a musical that I know of I thought of the Flying Nun! Hambo "Nun" digi is available for you to recreate this mini notebook! 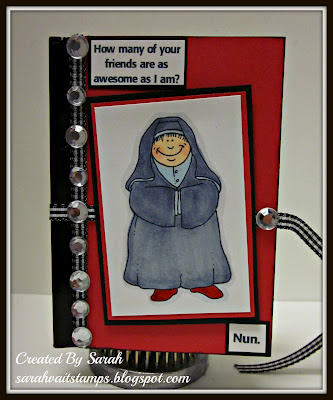 Now dance on over to Dawn's blog  for another great Broadway show!
Posted by Sarah at 7:00 AM

Nun other like it so far in the hop...haha...Okay...dumb pun. Great job on your Broadway Bound Hambo hop card!

This is adorable!! Love your colors.. the gems are perfect. LOVE it!

Great inspiration to do a notebook! I may need to try it! I almost used this one too. Like you said, so many possibilities and it is so cute! Great color choices too!!

Oh yeah - perfect digi choice when you think Broadway! Terrific job with this notebook Sarah - I love it! :)

Hi Sarah, GREAT idea to make a mini-notebook, especially with a nun on the cover (speaking from 12 yrs. of Catholic school, lol)! Love your colors and especially those red shoes!

Super cute! Love the notebook idea and the image is perfect!

How about the Sound of Music! This is hilarious - love the little Nun image and what a great idea to make a little journal instead of a card.

Your card is wonderful Sarah! I love your notebook idea too :)

The nun is adorable!! Love the sentiments :)

Sarah I love your card, love all the bling on it and definitely love her red shoes!!!! here in England GB, there is a saying "red shoes, no knickers!!!!!) LOL

This one really made me smile- now I need to CASE it for an ex nun friend!

Sarah, your notebook is so cute. I love the bling & the red shoes. Great job on the challenge.

Just adorable! I love the Nunsense shows!!! And I am old enough to have watched The Flying Nun. :)
Thanks for joining our hop today~!

So cute and I guess right on Nunsense! Love the sentiment/riddle and the bling embellishments.

What a darling little notebook. The sentiment you added is hysterical. I love the ribbon and bling on it too. I'm impressed with all of your nun musicals. The only one I could think of was the Sound of Music.

Love that you did a notebook instead of a card....might steal this idea to make some Christmas presents for my friends! Thanks for the inspiration, you rock!

LOL! You missed Late Night Catechism!! That nun image is my very next purchase!! Wonderful card, thanks!

Such a great notebook! I love the sentiment. Such fun!!

Love this! hahaha that Hambo sentiment is so funny!

Hee Hee, that is so cool x

This is great! Love the sentiment with this image. What a neat idea to make it into a notebook!

You were really smart!!! I didn't think about how many possibilities you have with this stamp!!!. Very well done!!!

Oh, this is so great to use on a notebook!! Love your colors and the bling on the side is great! I am also another one who is old enough to remember the Flying Nun!

This is soo cute!!

Sarah
Minneapolis, Minnesota, United States
Thanks for stopping by my little blog! I am so excited you are here. I hope you enjoy what I have to share.